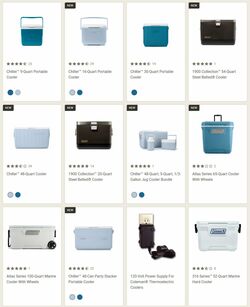 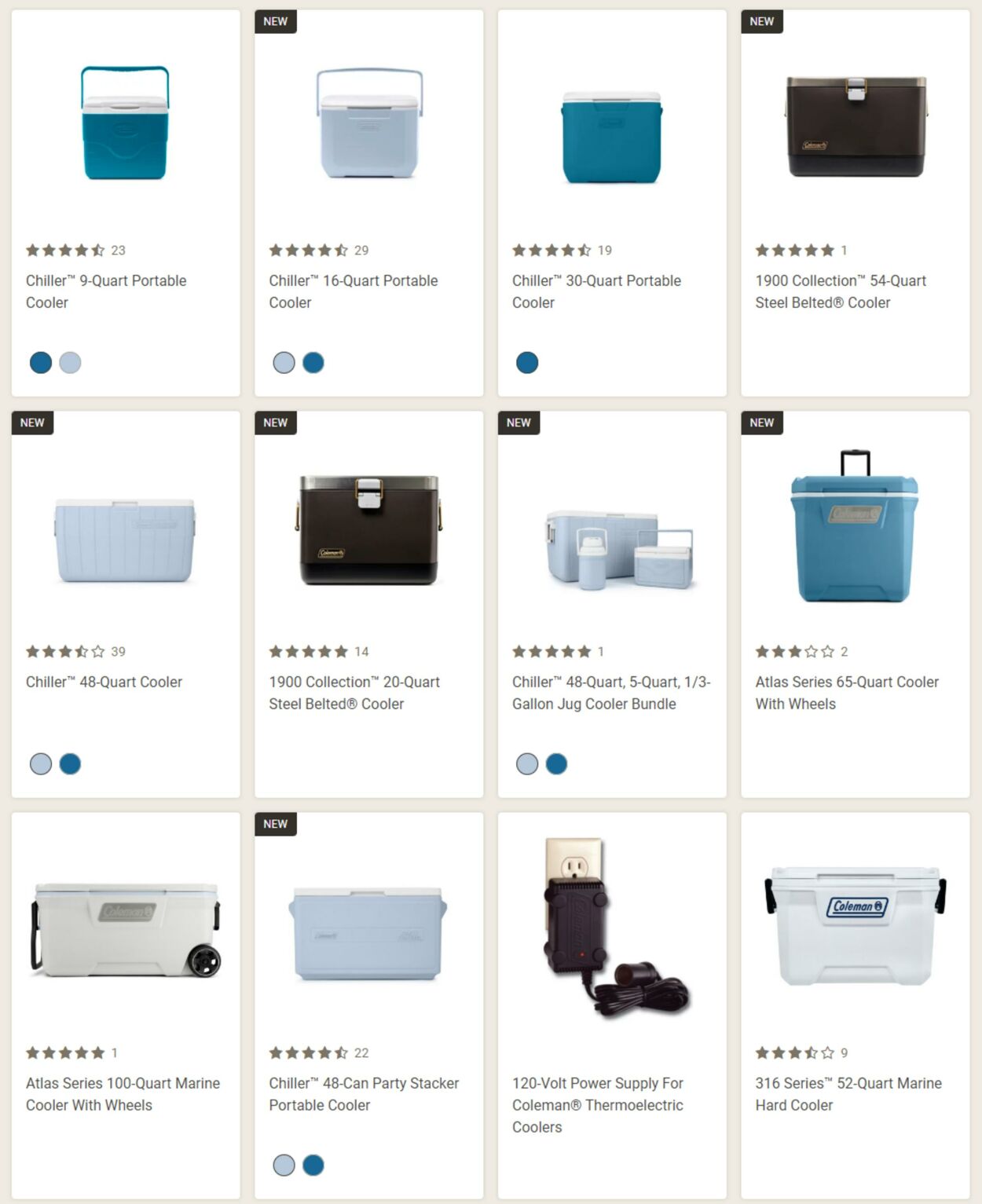 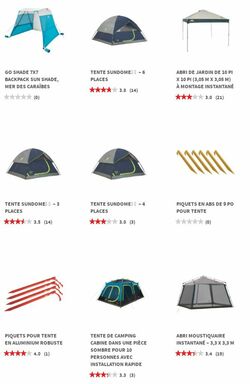 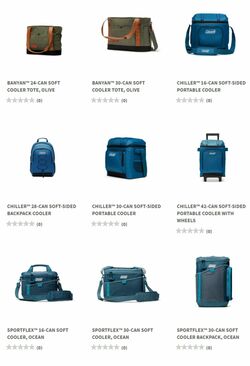 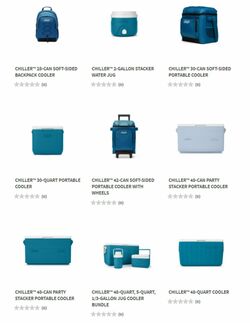 Coleman Company, Inc., is a brand of outdoor recreation products, especially camping gear, owned by Newell Brands. Coleman Company's headquarters are in Chicago, and it has facilities in Wichita, Kansas and in Texas. There are approximately 4,000 employees.Some of the products manufactured are portable stoves, lanterns, coolers, sleeping bags, camp chairs, and shelters.

Coleman was founded by William Coffin Coleman, who began selling gasoline pressure lamps in 1900 in Kingfisher, Oklahoma. In 1905, the company provided a demonstration for the 1905 Cooper vs. Fairmount football game (now called Sterling College and Wichita State University). Coleman gas lamps were provided to play the first night football game west of the Mississippi River. In 1996, the company acquired the French Campingaz. Through a series of acquisitions via Sunbeam Products and Jarden, Coleman is now a subsidiary of Newell Brands.

Throughout its history, Coleman has produced a wide variety of equipment primarily aimed at the camping and recreational markets. Perhaps their most famous product is the Coleman Lantern, a series of pressure lamps that were originally made to burn gasoline. Current models use Coleman fuel (white gas) or propane and use one or two gas mantles to produce an intense white light.

The Coleman Company, Inc. added many recognizable brands to our family of goods after the dawn of the new century. Under the Coleman tent, you’ll now find Sevylor® floats and towables, Stearns® life vests, Mad Dog Gear® ATV accessories, Helium® sports vests and AeroBed® airbeds. It’s a challenge to outfit yourself for outdoor fun and not have something from the Coleman® family of products with you. What started out as a lamp that could light up four corners of a barn has become a company that has helped light all four corners of the globe. Coleman products have journeyed deep in the Sahara desert, and been along on treks all the way to the South Pole. Coleman lanterns guided aircraft to safe landings in the Andes Mountains in South America in the 1920s, and helped climbers reach the top of Mt. Everest in the next century. Hiking, camping, fishing, hunting, boating, swimming, four-wheeling, relaxing, tailgating…Being in the outdoors has so much to offer, and Coleman has everything to help you get out there.

In the past, the company also produced a range of cooking stoves and domestic irons. Today, Coleman also manufactures camp stoves (Coleman produced the original "G.I. Pocket Stove"), sleeping bags, coolers, hot tubs, generators, watches, sandals, tents, dog toys, and backpacks among other things. They also make a line of small boats, including canoes, pontoon boats, johnboats and the unique scanoe. In the past they also sold pop-up travel trailers, Skiroule snowmobiles and the Hobie Cat brand of sailboats. The company has recently started producing a backyard barbecue grill, which is sold at Canadian Tire. A separate company, Coleman Heating and Air Conditioning, sells home heating and air conditioning units. Coleman Heating and Air Conditioning is owned by Johnson Controls, and uses the Coleman name and logo under license. Coleman also produces ATVs and mini bikes under the Coleman Powersports brand.

Please note that product images are for illustration purposes only. Discount prices are sourced from official listed retailers. Discounts are valid from and until the listed date or until supplies are sold out. These sites are to be used for information purposes only and cannot be used to exact goods according to these specifications. Prices may vary by location.
Use of cookies

Information, including personal data, obtained in connection with the use of cookies on the Website, is processed by as the service provider of the Website (hereinafter “Service Provider”) for the above-mentioned purposes and may also be processed by its Partners indicated in the Privacy Policy. Therefore, the user has the right to access his personal data, rectification of personal data, erasure of personal data, restriction of processing and to object to processing as well as the right to lodge a complaint to the President of the Office for Personal Data Protection. Detailed information on cookies used on the Website and other information on privacy related to the use of the Website are available in the Privacy Policy.

This panel allows you to adjust the choices regarding cookies that will be used on the Website by consenting to the use of cookies for specific purposes selected by the user.

By selecting the "I accept all" option, you consent to the use of all cookies on the Website by Service Provider and its Partners, indicated in the Privacy Policy, for all purposes indicated below. Expressing consent is voluntary.

These cookies are used for marketing purposes such as personalizing ads and content based on your interests, measuring ad and content performance, and getting insight into the audience that has seen the ads and content. Information collected in this way may also be sent to our partners with whom we cooperate, if the user agrees.

The website uses cookies to optimize the services it offers. These files are sent by the server to the web browser when visiting our website and stored there. This allows for greater convenience when using the website. The information derived from cookies may be used by the website for the following purposes: understanding traffic, providing personalized advertising or storing preferences, habits and other benefits to provide you with the best experience while browsing our website. Cookies remain in your browser even after you leave our site. Cookies are completely safe for your device.
Since we value the right to privacy, we give you the option to block certain types of cookies by clicking on the appropriate section. After changing the predefined cookie settings, the functionality may be limited, or some options on our website may be disabled, which in turn will affect the comfort of using it.
By visiting our website with cookies enabled, you accept our cookie policy.

They allow us to tailor our ads to your preferences. The data collected by our partners allow for personalization and measurement of satisfaction resulting from displayed ads.
Disabling marketing cookies will not disable advertising on the site. This action will only affect the content of the ads, which may degrade the user experience while using the website.
You can change your decision regarding marketing cookies at any time. Ads will not match your preferences. Cookies will be used but not for personalization.